The Design Lab is a research group in the Faculty of Architecture, Design and Planning, committed to interdisciplinary, design-led research that leads to improved interactions and experiences through and with digital technology.

The Lab is home to projects that span the areas of interaction design and creative technologies and as such required a new logo that represents the very purpose and essence of this space. My design was highly influenced by the work Surface (2009) created by Casey Reas which in turn was influenced by Buckminster Fuller's Dymaxion Map. The triangles became a point of focus for me in my research and concept sketches as I liked the idea that on their own they make a shape, but they can also be put together to make any number of different shapes. Something I feel is an important characteristic of the design process where it is often through collaboration that the best ideas are formed. My research then took me to a sketch by Jan Vantomme on OpenProcessing.org which features a triangle grid with a line running across the screen, restricted by the lines of the grid. I was interested by the idea of linkage between the triangles but wanted to focus more on the colours associated with the Design Lab as that is an important feature of any logo in making it easily identifiable. I decided to make use of the grid of triangles and the fill(); feature in processing to create an animation that fills the triangles with varying hues of the signature yellow and also clears the fill so that the whole image is never coloured.

The following is an early sketch I did of my design concept: 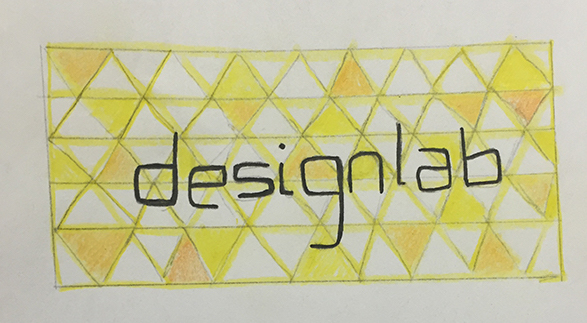